September 23, 2010September 18, 2015Leave a comment
If you work or live in Costa Mesa/ Newport/ or near the Orange County Fair Grounds, there is a new food gathering on Thursdays.
Piaggio on wheels, Bakery Truck, Calbi and Louk’s to go are there serving up some good grub!
The Fast Food Maven mentioned it in the article I posted earlier, but I thought I’d post the flyer.

I didn’t get a chance to chase a truck today, so I’ll share something very ironic, and humorous…

Tonight, the winner of the Great Food Truck Race, Grill em all, was at the Bootlegger Brewery in Fullerton.  As a food truck chaser, that should have been a no brainer for me to go try them.  Instead my long time girlfriend (or my “bff” as girls call it) wanted to to go Island Burgers for dinner.

How ironic that I give up a chance to eat a “bohemeth” burger from @Grillemalltruck for an ordinary brick n mortar restaurant burger.  Sigh…. she must be a good friend, eh?!

Then again, after checking twitter, maybe it was good I didn’t go. Look at the line!!! 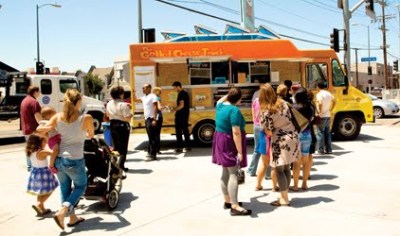 Wow, food trucks have indeed gone main stream!! I received a tweet from the Auto Club of So cal who wanted to share a write up on LA food trucks being featured in this month’s Auto Club News.

Click this link to read the article on the “newer” trucks you can find in the greater LA area.  Too bad they didn’t interview Orange County Foodies to represent the OC!

Auto club also interviewed the one who started it all
The @KogiBBQ owner, Roy Choi.
Click here for the interview with Papa!

LA trucks Ahn-joo and Nana Queens (as featured in the Food network tv show: The Great Food Truck Race) were going to be there.  Normally I would not hesistate and make my way to Irvine in a heartbeat… except I also had a Ducks hockey game… and I NEVER miss a Ducks game.

Lucky for me, it was only a preseason game, and those games do not count. Also, hockey is not popular here in The OC, so there was no reason to worry about a crowd… especially on a preseason game.

We decided to take a chance, fight the rush hour traffic, take the food to go, and gorge out at the Honda Center parking lot!  I went home, got Martin, and made our way to Irvine, arriving a little before 5:30 (fortunately before the crowd arrived!).

I was 2nd in line at Ahn-joo, and Martin was 4th in line at Nana Queens. After I placed my order, I ran to Nana Queens to take Martin’s place, and he went to Piaggio’s to order his food.  By the time I got his pudding, his order was done!

We avoided the 55 freeway traffic by taking Main Street to the 5 freeway, and made it to the Pond at 6:20…. and was able to be in our seats before the puck dropped at 7 pm! Wow, that was teamwork!