The Granada Hills Grubfest is going on their 5th year. The 2015 season brought on many changes, including being Los Angeles’ 1st permit parking for the Gourmet Food Truck industry.

Photo by Dustin Ames
I will admit I was skeptical of GD Bro Burger. First of all, I’ve eaten a lot of burgers, and there’s honestly not a lot of space to innovate between two buns. Second — and the guys behind GD Bro know it — the trademark red bun that adorns all of their burgers kind of looks like a gimmick.
But the truck just made it on the Food Network’s Great Food Truck Race and the Afters guys have cosigned the restaurant by investing, so last Thursday night, I figured ‘heck, why not’ and made the trip to the friends and family soft open at the old Toro Burger spot in Santa Ana, where GD Bro Burger’s new brick and mortar is now operational.

First things first: The wait was and will be long, and like I said in the first Milky Bun review, it’s probably not worth it if you have to stand in line for longer than half an hour.

That being said, the food at GD Bro is genuinely good. If you’re looking for hip multicultural-chic burgers, the ones at GD Bros are comfortably some of the best you can get. The team behind the restaurant actually put some thought into their food construction, unlike some other hip burger spots (ahem, Umami), and it really shows.

GD Bro’s main distinguisher from other shacks is their wonderfully crimson burger bun. The bun worried me the most, because to get this kind of color in bread, you often bake at a lower temperature to prevent too much browning. This makes the bread pretty, but unfortunately can also dry it out. I’m pleased to report that, thanks in part to a higher than average fat content, GD Bro’s brioche-type red burger buns aren’t dry at all. They’re wonderfully pliant, soft and airy, like biting into a freshly fluffed pillow.

The fat in the buns works double duty. In addition to keeping the texture wonderful, it also keeps the bun from dissolving under the weight of wet toppings and juicy meat, my personal pet peeve when it comes to burgers (again, ahem, Umami).

Right now, on menu you can get six different burgers. If you can’t see them in the picture up there, head on over to their website, where five of ’em are listed. The one missing is the KBBQ poutine burger. I’ve only tasted two of them, and my general consensus so far is that the flavors work, the ingredients are fresh, the sauces are saucy, and everything is more or less tasty.

The toppings are where the burgers get their identity. GD Bro puts everything in their burgers, from fried mozzarella sticks on their Italian Stallion to kettle-cooked potato chips on their All-American and full on kalbi poutine on their KBBQ poutine burger, and it works. Because the buns are so hearty, everything more or less stays in place, and that’s helped even more by the fact that many of the toppings aren’t even toppings — they’re bottomings. (For a crash course on bottomings and how they can help a burger out, check out this Serious Eats article on recreating the Whooper). Of course, pieces of flair can’t do too much without a good base on sit on, so let’s talk about the beef.

GD Bro uses a rougher grind for their beef and forms their patties a little looser, which is awesome, because you get a very good amount of beef flavor. The patties are huge too, much thicker than almost anywhere else in OC save for maybe Slater’s. It’s a worthy base for everything else to sit on, though it’s not my absolutely favorite (That honor goes to Mick’s, who was present at the opening).
All in all, the burgers at GD Bro are as good of an $8 – $11 burger as you’re going to get. If that’s what you’re craving, you’ll be pretty happy. Give ’em a few weeks to get the kinks in service worked out and for the lines to die down, and there’s no reason GD can’t become a new OC favorite.

Postcards Central American Soul (CAS) Food’s signature dish is chicken, mac ‘n cheese, and greens served in either a wrap or bowl. All of PostcardsCAS’ dishes are inspired by famous African-American historians such as “The Greatest” inspired by Muhammad Ali, “Langston’s Choice” after poet Langston Hughes, and “Alice’s Final Word”, inspired by author Alice Walker who wrote “The Color Purple.”

King launched PostcardsCAS in 2013 after leaving a successful career as a marketer for some of the biggest brands in the world, including NBC, Warner Bros., Fox Entertainment Group, L’Oreal, and Mattel. King’s food has been showcased on The Food Networks hit series The Great Food Truck Race and Maria Manounos’ Success is the New Black.

Chef Barb from B Sweet will be there, back for her 5th season, bringing her mini truck for the first time. Will be serving 4 flavors of ‪#‎breadpudding‬ and samples of their crazy good ‪#‎NitroColdBrewCoffee‬ on tap!

Here’s a great Flashback Friday for the food truck fans!

It was the brainchild of Taco Dawg, where he got 50+ food trucks in the parking lot at the Honda Center. Those who were lucky to have scored VIP admission got in 30 minutes before the general public, and was able to get food and get shelter from the blazing sun under a tent.

There were plenty of complaints from general admission fans ranging from there was not enough shade, no water, not worth the admission, unorganized and the line to get food was way way too long… as long as an hour for some truck.

Yup, those were good times… and very much a part of the Southern California Food Truck scene.  Enjoy the snippet of 2010, and be thankful that food truck fans don’t suffer this way anymore. 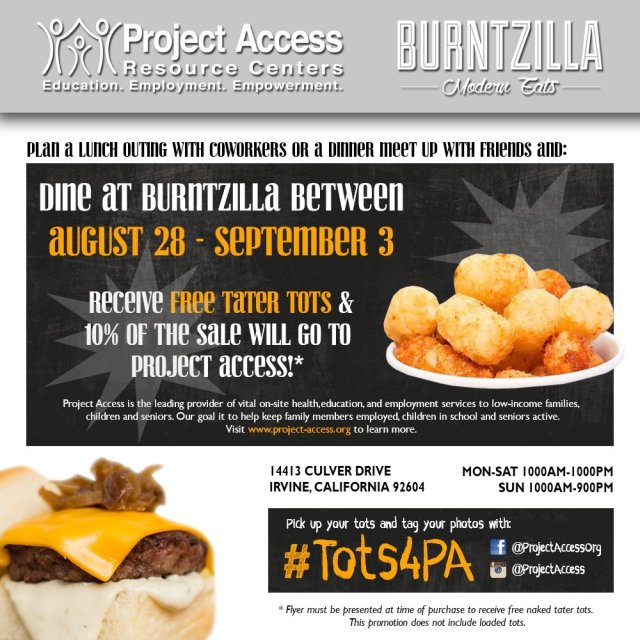 Burntzilla is teaming up with Project Access on Friday, August 28 through September 3.

Each customer that shows the flyer will have 10% of their purchase go to Project Access. As an added bonus, when you show your flyer- you will receive a free order of Burntzilla’s tasty tater tots!

Please invite your family and friends to this event page https://www.facebook.com/events/524862384348615/ and coordinate an outing to the restaurant that week.

The official hashtag for this event is #Tots4PA, use it in your social media posts to show your support of Project Access.

ABOUT PROJECT ACCESS
Founded in 1999, Project Access – a 501(c)(3) nonprofit organization – is the leading provider of vital on-site health, education and employment services to low-income families, children and seniors. Our goal is to help keep family members employed, children in school, and seniors active. The seniors and families served by Project Access are “low-income”- that is, with incomes at or below 60% of the area median; and a substantial number are “very low-income” – often with incomes below $10,000 per year. Project Access runs resource centers at more than 60 properties throughout California, Arizona and Colorado and provided direct services to over 11,000 people in 2014.

Haole Boys Shave Ice (@HBShaveIce) was at the Food Truck Haven on Thursday. It’s just like getting a cool, refreshing cup from the Islands! Don’t see what you want?  Ask them to create something from their Secret Menu!

The Adobo Express Food truck (@AdoboExpressOC) was at the Food Truck Haven on Thursday night.

(Los Angeles, CA) – Out of hundreds of potential contestants, Producers of The Food Network’s The Great Food Truck Race, selects Postcards Central American Soul Food as one of the seven competitors for Season 6. The owner Greg King and chef of PostcardsCAS, from Southern California specialize in soul food cuisine. PostcardsCAS will be hosting their viewing event on Sunday, August 23 @ 5PM at The Parlor, 7250 Melrose Ave, Los Angeles, CA 90046.
The Great Food Truck Race will begin its sixth season in Santa Monica, CA as the food truck operators head out for a 2,500-mile journey along America’s historic Route 66. They’ll be making stops in Arizona, New Mexico, Texas, Oklahoma, Missouri and Illinois before finishing with an action-packed finale in Chicago. Host Tyler Florence will be navigating a team of professional food truck operators through multiple challenges geared to test their resolve and find “the best gourmet truck in the country”. The winning food truck will walk away with a cash prize of $50,000.
Read more at: http://blog.foodnetwork.com/fn-dish/2015/07/the-great-food-truck-race-season-6/?oc=linkback
Lovers of soul food can look forward to meeting the team and experiencing the day-to-day adventure they face on the road as Greg, Grae and Monique travel across the country competing for the win.
Postcards Central American Soul Food’s signature dish is chicken, mac ‘n cheese, and greens served in either a wrap or bowl.  All of PostcardsCAS’ dishes are inspired by famous African-American historians such as The Greatest inspired by Muhammad Ali, Langston’s Choice after poet Langston Hughes, and Alice’s Final Word, inspired by author Alice Walker who wrote “The Color Purple.”
“Soul food is loved by people of all walks of life; however, often it’s only found in urban communities,” commented King. “I want to make this cuisine healthy and accessible to everyone, and it seems to be working…”
A foodie from childhood, King began his career in the food industry working alongside his dad in the family soul food business at the young age of 12. King’s dad, a classically trained chef, taught his four sons the artistry of cooking culinary dishes with a soulful twist. King easily picked up techniques for creating great soul food; however, in establishing his business he wanted to present it as healthier alternative to the decadent soul food created by his parents.
King launched PostcardsCAS in 2013 after leaving a successful career as a marketer for some of the biggest brands in the world, including NBC, Warner Bros., Fox Entertainment Group, L’Oreal, and Mattel.
King has utilized his professional experience as the sounding board to building a successful restaurant business. PostcardsCAS delivers tasty and healthy soul food options easily eaten on the go, because they are served in a wrap or bowl. Similar to Chipotle where Mexican cuisine is served in a wrap or bowl; King his customized a tantalizing menu offering notable soul food staples available for consumers who love southern soul food cuisine; yet, he’s added some Belizean staples (such as Rice and Peas, Oxtails and Plantain) to compliment his offerings.
Follow them on social media:
Website: www.postcardscas.com
FaceBook:  www.facebook.com/PostcardsCAS
Twitter:  www.twitter.com/Postcardscas