There are two things Samuel Adams is known for — being a founding father of the United States of America and brewing some tasty beer. And there’s no better way to celebrate Octoberfest than at the Samuel Adams Octoberfest Experience, kicking back with a towering mug of ice cold beer while hearing music from a lineup of accordion-based bands, including Jim Gilman und Der Burgermeisters, as part of the annual O.C. Accordion Festival, aka “The Big Squeeze.”
Inside Costa Mesa’s Orange County Market Place, the weekend swap meet at the OC Fair & Event Center, this ultimate beer festival is overflowing with activities: a stein-hoisting competition with a beach cruiser bike prize and live performances from the Doo Wah Riders (country), Los Fabulocos (Tex-Mex), Bonne Musique Zydeco (Cajun/Zydeco) and The Ploughboys (Celtic). Admission also includes your choice of four 12-oz. Samuel Adams fall seasonal Octoberfest brews, Gaslamp popcorn, a giant pretzel and a food option from one of three gourmet food trucks.

Food trucks remove the temptations associated with takeout, such as eating on the car ride home or hurling your rotisserie chicken at litterers. Keep your food hot and your temper cool with this Groupon.

The Dogzilla food truck isn’t your average hot dog spot. Proof: even the “plain jane”, a dog topped with classic ingredients like ketchup, mustard, onions and sweet relish, gets a signature touch in the form of a toasted sweet Hawaiian bun. From there, the options grow ever-more adventurous. The all-beef franks boast toppings like yakisoba noodles, furikake seasoning, and jalapeño aioli. Customers can even customize their dog by choosing one of the signature styles, then adding extras such as a fried egg or avocado, or by swapping the traditional frank for a spicy pork sausage or veggie dog.

Street Food Cinema Ticket: Select dates through October 31
Classic films paired with food trucks? No, you’re not dreaming. That’s what you’ll find (and more) at Street Food Cinema, an outdoor movie series also featuring live music — one more reason to get super excited for all that 2015 has to offer. Choose a one single-day ticket to see the film of your choice — whichever film you select, show up when doors open at 5:30 p.m. to show off your cinema chops during a movie-themed audience game, grab a bite from your favorite food truck, and enjoy the live music acts. 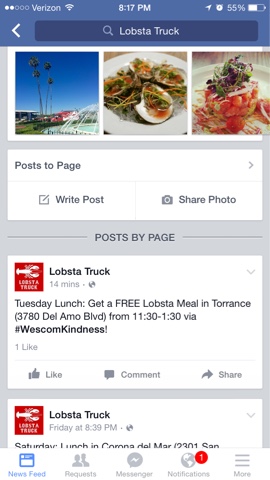 Free LOBSTA on Thursday, too!

Get Free Lobsta Truck for Lunch TODAY in Tustin

Quick, is it before11:30 a.m. when you’re reading this? If it is, and you’re in the vicinity of Tustin, you can grab yourself some free lobster for lunch thanks to the fine people over at Wescom Credit Union. Head on over to 1 Auto Center Drive in Tustin (also known as the Tustin Auto near Costco) for free food from the Lobsta Truck.

Lobsta Truck will be there until 1:30 p.m. or until the $2,000 worth of lobster Wescom’s paid for has run out, which ever happens first. This treat is part of the credit union’s months-long #WescomKindness campaign, which also had them picking restaurant tabs and handing out gift cards to post office customers on Tax Day. To read more about it, click here, and remember, credit unions are almost always better than banks.

This Groupon does not include parking, and is valid for all 2015 events except those held at Will Rogers Polo Grounds. Online redemption is required.

Spanning spring through the fall, Street Food Cinema rolls out more than fifty events in eleven different locations over 27 weeks. This showcase highlights the greatest hits of the silver screen and the LA food-truck scene, as well as music from emerging music artists such as The Rebel Light.

When the gates open, guests spread blankets on the grass and pop open coolers. Live bands play until dusk, when crowd-pleasing movies such as Fight Club and The Sandlot light up the big screen.

Meanwhile, a rotating food-truck schedule assembles a diverse curbside lineup, which might include fresh seafood from Cousins Maine Lobster or the gooey delights of The Grilled Cheese Truck. Their events also feature movie-themed games projected on the big screen for audience participation.

Street Food Cinema’s eclectic assemblage of food, music, and films has picked up attention beyond the park’s bounds, snagging mentions on NBC4, We Like LA, and The Washington Post. Other videos of the events in action can be seen here. It’s also become known for its philanthropic work: each year the organization supports several charities.

Expires Oct 31st, 2015. Limit 2 per person, may buy 1 additional as gift. Limit 1 per visit. Valid only for option purchased. Parking not included. Redemption locations vary; valid for all 2015 season events except for those held at Will Rogers Polo Grounds in Pacific Palisades. Online redemption required. Merchant is solely responsible to purchasers for the care and quality of the advertised goods and services.