June 2012: Someone asked me why I still have #MobileFoodProperties as one of my calendar links.  I told that person that even though MFP is no longer a bully to the mobile food trucks, there will be another “MFP” wanna be out there. In any industry, there’s always someone who thinks they’re the big fish in the little pond.  I want to remind the next “big fish” that there will always be a David, willing to take down the Goliath.

If you are going to promote the food trucks, remember

MFP started off as a great promoter, and then got (IMHO) greedy by overcharging and under promoting.  They relied too much on bloggers and food trucks to do their work.  Food bloggers like me don’t mind lending a hand, but I don’t think my job is to do your work.

May 02, 2011: It seems like its been a lifetime ago when MFP dominated the OC Food Truck gatherings.  You can  click here to see past articles written up by The Fast Food Mavan on MFP and Coleen Craig (the person in charge of MFP), and Baja Fresh, the corporation who owns Calbi BBQ. I totally forgot that Kogi BBQ accused Baja Fresh of stealing their “Kogi Taco” food idea (fusing mexican tacos with korean pickles).

April 11, 2011: FastFoodMaven asked Mr. Kim, owner of Baja Fresh (who owns Mobile Food Properties) to comment about MFP.
This was what Maven got out of Mr. Kim.  Hmmm, interesting that Baja refuses to acknowledge that MFP screwed up, and also tainted their reputation. It would have been the perfect way to wipe a clean slate… just saying.  Click here for the complete article.

Jan 28, 2011 The rumor mill says MFP cleaned house and have let go two of their employees.  I feel the head of MFP should to the right thing and address the tainted past.  Hiding it or avoiding the issue means he approved the shady tactics, which means MFP is still unethical.


Feb 1: MFP is finally using the Kmart lot they stole with a #CarsonKmartFest on Feb 5

Feb 17:  After the failure of the Kmart lot, Rumor has it that MFP relinquished the SoCo venue, and lost the Great Park Irvine.  They also lost the City of Industry Best Buy lot due to city violation.

I am  looking forward to dine on Tuesdays and Saturdays  for lunch at SoCo, and on Sundays at the OC Great Park. Huzzah.

Thank you  to the foodies for taking the Ethical Stand! Our dollars (or lack of) have spoken loud.

Even though MFP may have bowed out of the little venues, I’m keeping this open in the event they (MFP) plans on tackling larger venues.  Until we (the public) gets a formal statement, MFP will always be viewed (in my eyes) as unethical.

To my readers-
By reading my blog, you can see that I enjoy supporting the Gourmet Food Trucks, and will refuse to do anything that will keep them from making a decent living.

There is an organization called Mobile Food Properties (MFP) who relies on trucks, as well as foodies like you and me, to keep bread and butter on THEIR table.  MFP is like a booking agent for venues and Food Trucks. Recently I’ve learned they’ve been doing unethical (however not illegal) practices toward the Food Truck community.

For months there’s been growing hostilities between MFP and multiple OC Gourmet Food Trucks over venues, cost, and booking fees.

Some food trucks feel that MFP charges too much money to participate in an event (from $50-$300 or higher, and in addition they charge a percentage of the final food sales).  MFP will lure the food trucks (particularly newly launched ones) with claims they can “guarantee” a large crowd. However, they don’t promote the events in an effective manner and rely on foodies like us to do their “word of mouth”. Many trucks will load up on excessive food in preparation for a large crowd, but ends up not having the anticipated crowd as promised, thus losing money.

A good example is the CHOC event.  Trucks were charged hundreds of dollars just to enter the event, with the “guarantee” of 1000’s of people.  The general public was charged $8 per person to get into the event + $12 for parking (that’s without food).

The foodies didn’t feel this was a good value (as there was an event a few miles away with food trucks for free) and so only a few hundred people attended the event.  Even Knott’s didn’t promote the event very well, and many theme park patrons took advantage of the $15 admission to Knott’s over participating in the CHOC event.  Food trucks lost money because the big attendance they promised never came. Also the trucks never got a discounted refund on the event fee.  “SOME” earned a credit to apply toward a future MFP event.

Originally the flyer said 50+ food trucks would be in attendance, that is until the food trucks were told how much the entrance fee was (in the hundreds of dollars!).  They were also told 10’s of 1000’s of people would be in attendance, and that they had to stock up on food.  If they ran out of food, they would be fined $500.  In reality about 5000 people came to the event.  So if you do the math: 5000 people (divide by 25 food trucks) would mean 200 people per truck.  To put it in perspective, a truck like Grill Em All could hold 200 hamburgers just on a normal day, so to have excessive food for 200 people was plain wasteful.

The trucks also had to hike their price to the consumer 30-50% more than normal. For instance, one truck normally charges $6 for a quesadilla. To help him offset the fees, this truck charged the OC Fair patrons $9-11 for the same quesadilla.  In addition to the price increase, the 90% of the trucks had an obscene amount of leftover food. One truck lost $1200 due to the event because of the admission cost, excessive food they had to buy, and the food they had to toss.  MFP never offered to give a refund on the event fee, but gave “some trucks” a credit.  One truck  wasn’t able to pay for her fee, and is working off her debt (and it has been 35 days since the event).

MFP is not just a price gouger, but a food lot “vulture”.  What MFP does is monitor successful food gatherings (such as the South Bay Kmart lot), and then finds a loophole to go over overtake the the lot. While being a “vulture” is not illegal, this is highly unethical.   MFP has tried to take multiple locations, but was unsuccessful because the food trucks have warned the companies/ hosts of MFP’s tactics.

Also, it is not know if MFP has been tipping off the OC health department when LA trucks are known to attend non-MFP events.  OC DinDin a GoGo, Carter Lanes, and Lunch on the Run have all been targeted by the health department, yet no HCA agent has been at an MFP event.  Just curious on that….


Why I am boycotting:
Well, the war with MFP was “supposedly” with the OC Food Trucks.  I tried to stay out of the drama, and tried to be “as neutral” as possible by justifying it as being supportive to the Food Trucks.

Many bloggers were taking sides by openly boycotting the MFP events, but Martin and I continued to plug their events via blogging, and promoting the food trucks via twitter.  I never found a reason to boycott MFP until it became personal, and MFP attacked me and my integrity.

Thanks to a program called Who.Unfollowed.Me, I found out MFP not only unfollowed– but blocked me! Why would they block someone like me, a mere foodie, who was giving them free advertisement and tweets?

It seems MFP thought I was “one of those foodies” who was boycotting their events.  In a childish manner, then decided to act first, think later and “divorce” anyone who may have been opposed to them. Not once did they even checked my blog or tweets to see that I have, in fact, been supportive of their events.


What happened to just flat out asking me if I was “against them”?  Later, after realizing that they made a mistake, I received a private message asking for forgiveness. Forgiveness is given if it was truly a “mistake”.  Conciously clicking “block” and unclicking “block” does not come from a mistake, but guilt!

I took MFP’s insult to me personally. They questioned my integrity! Their slap to my face, and the unethical way they do business, made me decide to no longer support MFP.  Therefore:

I will not set foot on MFP property.  I will support my favorite gourmet food trucks by enjoying their food outside MFP events. It pains me to not support the trucks, but I had to take a stand and boycott MFP.

I may be just one person, but I hope that my favorite trucks will help me take a stand, and not support MFP.  In a way I have to thank MFP for blocking me, because I was fighting my own ethical issues on supporing them. Their decision to go against me actually helped me.

Foodtrucks (and foodies) There are ways to NOT work with MFP!

If MFP can treat a foodie like me as disposable garbage, I can only imagine how they treat their “employees”, the Gourmet Food Trucks (aside from price gouging).

Currently Mobile Food Properties have GFT gatherings at SoCo in Costa Mesa, OC Great Park in Irvine, and have rights to K-mart properties.  They don’t promote much on their own, and will have other bloggers & food trucks do the work to promote their events.

If you are not sure what is an “MFP” event, check @mobilefoodprops on twitter.

I hope you will join me in the boycott, and give a message to MFP that their unethical behavior will not be tolerated.  If we let MFP get away with this, there will be other “MFPs” waiting to be conceived.

It takes 20 years to build a reputation and five minutes to ruin it. If you think about that, you’ll do things differently.
– Warren Buffet 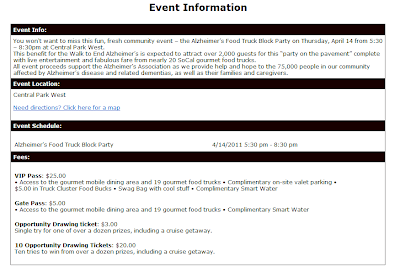