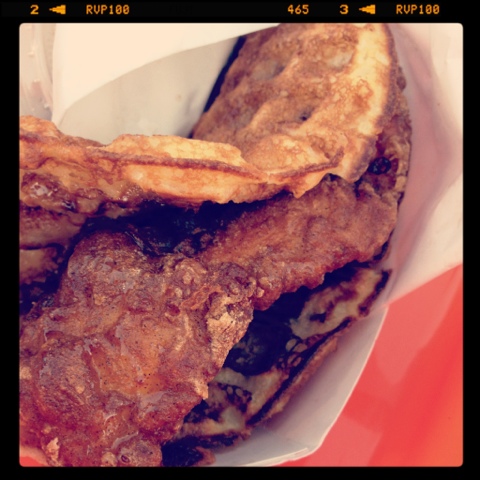 The Great Food Truck Race 3 should be over today.  I do not know who won, but I will extend a hearty “congratulations” to Nonna from NJ and Seoul from LA.  They outlasted 6 other teams, and had great support from new and old fans.

One thing I noticed from this season (compared to my participation in season 2) was a lot of below the belt comments, and breaking of rules from the fans as well as from the eliminated food trucks.

Last season, my opponent from Hodge and I had a healthy twitter competition. We never put down the other team. In fact, we even worked together, by tweeting locations at various cities, to convince foodies to eat from our 2 trucks. Our alliance worked all the way to the final 2… when we had our show down in Miami.

By the time the taping of season 3 was over, fair play was thrown out the window. There were breaking of rules by food trucks: Under the Crust and Coast of Atlanta.

Under the Crust and Coast of Atlanta openly tweeted their support for Seoul Sausage.  The rules of the GFTR is the trucks can not use social media about the competition. Even after confronted, Under the Crust refused to stop tweeting during the Race, even went so far as to block me from spying on their tweet.

I also found distasteful and disrespectful when an opponent makes suggestions that a pretty face, and not their food, is the only reason they made it to the finale.

I hope next season the fans will learn to play nice.  As Dragnet would say.. just the facts, ma’am.

Social media has proven that news travels fast… in fact, so fast that the Great Food Truck Race has been manipulated by the fans using twitter.  In season one, no one knew what the show was about.

In season two, fans like me supported our favorite truck and used social media to reach out to complete strangers, asking them to spend money on food trucks they have never heard of. This season, the producers of the Great Food Truck Race thought by using the “twist” of using foodies who want to own their own trucks, they would be able to avoid the social media frenzy.  They were wrong.  Fans like me, and family members of the wanna be food trucks, helped promote the Race via social media.

The GFTR decided to end this season’s Race in a remote town of Lubec, Maine.

Wow… population 1600 people?  Its totally still GAME ON!  It’s the Girls from Jersey versus the Boys from LA.  Try food from both trucks, and be sure to tweet with hash tag #GreatFoodTruckRace

The Food Network Channel is here to film their last episode in the latest series of The Great Food Truck Race… two trucks will be set up at 12 Water Street around 1:00… come over and check it out! The series will air mid-September.  Article found here>>  http://fb.me/1aAKjktXR