October 27, 2011September 18, 2015Leave a comment
My sister and guest blogger Becky underestimates Esteban from Barcelona on the Go….

Esteban from Barcelona on the Go really knows what his customers want to eat. That shouldn’t be much of a surprise considering he’s got a successful food truck cranking out consistent and amazing food.

Two weeks ago, he served a Spanish Shepherd’s Pie. It was served piping hot in its own individual container filled generously with a mixture of ground beef/lamb, peas, carrots and topped with mashed sweet potatoes and diced pancetta. I really hope he will serve it again because that dish easily ranked as one of my favorites on his menu (see photo above). At the time, he claimed he knew I was going to order it. I brushed his prediction aside, thinking that he could not possibly know me well enough.

This time around, I was about to place my order when he said, “I know what you are going to order.”

I paused for a moment and stared at him.
“Really?” I asked skeptically.
“Yes,” he grinned.
“Okay,” I challenged, “What am I going to order?”
“You’re going to order the soup,” he answered without a hint of hesitation in his voice.
He tweeted earlier that he was serving his chorizo and lentil soup for lunch. He doesn’t serve soup too often, but when he does, it’s always worth ordering.
Generous chunks of chorizo simmered with perfectly cooked lentils made this soup hearty and satisfying enough to get through any cold, dreary day. The soup was served with two pieces of garlic toast to complete the dish.
“Could I also add a sirloin taco to my order?” I asked.
His sirloin tacos with roasted corn salsa are one of his staple items that is another favorite of mine.
“Absolutely,” he said.
I bet he didn’t think I was going to order that.
On second thought, I bet he did.
Advertisement

Saturday October 29th from noon until 3:00 PM
Donavee Chrysler Jeep Orange County is having its annual FOOD TRUCK OR TREAT event with gourmet food trucks Pogi Boy and BaconMania!  There will also be candy and cake for the children along with a raffle for prizes such as a new Acer tablet computer hosted by the 95.9 The Fish street team.  Come down to enjoy good eats, treats, and a chance to win a new Acer tablet computer! 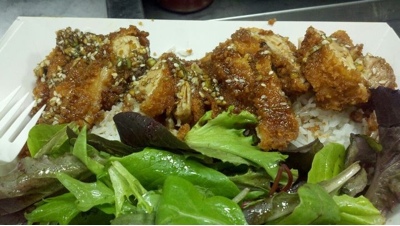 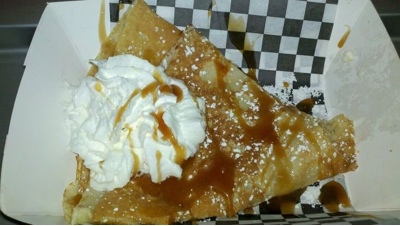